The comrades of the auxiliary students and I were born in the same month of the same year, and I met nearly 60 friends who had worked together for nearly a thousand years. (1) Companion comrades joined our party when they were under 18 years of age. He kept in mind the party's purpose and the pledge of joining the party throughout his life. He never forgot that the Chinese Communist Party cultivated him from a poor child of a poor family into a determined proletarian revolutionary. He persisted in studying Marxism-Leninism, Mao Zedong Thought, Deng Xiaoping Theory and the important thinking of the "Three Represents" and implemented the scientific development concept. No matter in daily work and political storms, the position is firm and the flag is clear and the Party Central Committee is consistent. Demonstrate learning, comprehension, propaganda, and implementation of the party's various principles and policies, and was elected as the representative of the 13th National Congress of the Communist Party of China. Comrade Wang Fusheng deserves to be an outstanding member of the Chinese Communist Party. (2) Companion Comrades is one of the few directors of the grinding wheel factory appointed by the Central Organization Department of the CPC in the abrasives industry in China. He worked hard and devoted himself to the abrasives industry. In particular, during his tenure as the director of the second sand, he led the whole factory staff to reform and make progress. Make Ersha the largest and world-famous company in Asia. The output and quality of the products all ranked first in the national industry. â€œWhite Doveâ€ flies to nearly 70 countries and regions around the world. The company and his individual also won a number of honorary titles. The industry colleagues praised the assistants as the factory director during the period, which is the most brilliant period of Ersha. Comrade Wang Fusheng is worthy of being an outstanding entrepreneur in the Chinese abrasives industry. (iii) Recalling that in 1953, that was the beginning of our countryâ€™s first five-year plan to develop the national economy. With the launch of large-scale national key construction, international economic and technical secret information exchanges have soared. In order to meet the needs of this situation, the central government decided to set up a "foreign communication contact" department at the then Chinese Ministry of Foreign Trade. The Ministry of Foreign Affairs of China transferred me and Zhao Fengzhi and Lan Xiaoyou to participate in the preparatory establishment. Then, the army and the relevant schools and institutions across the country selected a total of more than 20 comrades. In March 1953, they formed the "Foreign Communications and Communications Section" led by the two ministries of diplomacy and foreign trade. Since there were not many countries that established diplomatic relations with China at that time, our activities were mainly in Asia and Europe. Therefore, the comrades in the Ministry called our team "the Eagle of Asia and Europe." I got acquainted with the comrades of the auxiliary students and started from here. Because foreign affairs discipline and confidential work regulations are very strict, each comrade is required to not only have a high political quality, but also be proficient in his own work, have the ability to deal with unexpected events; at least master a foreign language; be familiar with the relevant country profiles and terroir Human feelings, etc. Since I was the business secretary at the time, I clearly remember that the comrades in the comrades were very hard-working, willing to use their brains, be good at asking questions, and successfully pass the training period. It is one of the first people to go abroad to perform tasks. Through the exercise in the future, he will soon become an outstanding "war eagle" who can independently fly to Asia and Europe. In the past few years, the safety rate was 100%, and the mistakes were zero. They were excellent in foreign-related and classified business assessments and were repeatedly commended. 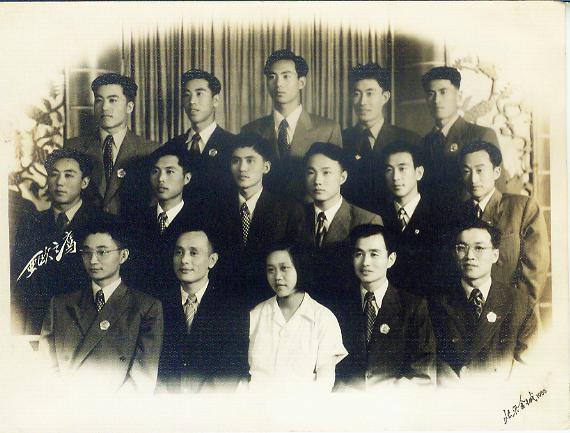 The attached photo was taken in 1955 by a commended comrade. The right one in the middle row is Comrade Wang Fusheng, and the second in the back row is the author. (4) In early 1957, according to the general arrangement of Ersha and the Sino-German agreement, nine comrades were selected to go to the Democratic Republic of Germany. Engineering and technical professional training. I will be the leader of the team and the comrades of the auxiliary party will serve as the secretary of the temporary party branch. The characteristics of our group, one is not equipped with translation, and the other is a study plan for everyone. Once they arrived in Germany, they were "thrown" one by one into the Germans. Although short-term German training before going abroad, it is far from independent living and learning requirements. Although some comrades have a certain Russian and English foundation, but in order to pass the German language, everyone is sleepless and forgetful, and they struggle all night long. Due to the tacit agreement between the two students, it is agreed that the whole group will gather once a week, open a business meeting, and live a party life at the same time. Study documents, communicate situations, and exchange experiences. We proposed and approved by the embassy in Germany to change the single-family hotel to live in a German home. It not only saves the country's expenses, but also greatly accelerates the training and level of foreign language, which creates favorable conditions for completing the study plan ahead of time. After the domestic instructions, each comrade has added a different learning task. For example, the process design and correction of various professions; the technical service project of Comrade Wang Junjie; the affixing mill of Comrade Hua Zenghe has the collection of Guanxin technical materials; the experimental research project of corundum and silicon carbide, and the additional boron carbide project I have added. . At the joint meeting of the heads of the International Student Group held at the Embassy in Germany, our team has been praised many times. First, because there have been no violations of foreign affairs disciplines and other accidents in our group. (Like our previous group lost passports, unauthorized participation in unplanned activities, etc., such as a group in Beijing, missing individual personnel and other foreign-related events); Second, because our group exceeded the learning task; third is affirmative and promoted We are renting houses. Recalling this, this is the result of a high degree of conscious, strict self-discipline and joint efforts of the entire group of comrades. At the same time, it was also revealed that the comrades of the auxiliary comrades had fully played the role of the battle bastion. Companion comrades, rest in peace! Your revolutionary spirit, your immortal performance, will always be remembered in people's hearts. Xia Yaofeng 2012.6.20

FHM fence factory provides a variety of Airport Fencing Of Welded Wire for your supplying chain/warehouse.You could have a multiple choice here.This Airport Fence is Welded Wire Mesh Fence panel with razor barbed wire, Airports and aviation buildings are sensitive areas that require perimeter fencing solutions that stand up to the high risk levels. There are also demands from a legislative and legal aspects that are often unique to aviation based environments.